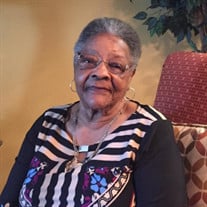 Barbara Elaine Godfrey, age 84, was born October 9, 1936 to the late great Moses and Bessie Clark of Chesapeake, Virginia. After a period of sickness, the Lord gave her wings on June 3, 2021. She was the oldest out of thirteen siblings. She is survived by her sister Linda Green, Chesapeake, Elder Morris Clark (Arsenia), Suffolk, Paul Clark (Benita) Chesapeake, and Roland Clark, Maryland. She was known to her loving siblings as “Bobbie.” She was married to the late Ezra L. Godfrey. Their 62-year union created twelve children: Cynthia Parker (Pernell), (D) Ezra L. Godfrey Jr. (Dianne), (D) Miles M. Godfrey (Renee), (D)Theodore R. Godfrey (Sharon), Deacon Chester R. Godfrey (Carlene), Barbara Barrett ((D) Waverly). Dr. Sherline Cooper (Deacon Donald), Mins. Colby Godfrey (Darlene), Nanette Elliot, Mins. Denise Smith, Pastor Frazier Godfrey (Amanda), and Deacon Robert J. Godfrey (Audrey). She attended Carver Elementary School but left early to support her family. She picked up a trade which landed her a job spear heading the STOP Program, a program that focuses on providing housing as well as nutritional and employment needs for families emerging from poverty throughout the Hampton Roads Area in the early sixties. She worked directly with the youth of Chesapeake City Public Schools for many years helping them obtain their work permits for Summer Jobs. Because of these skills, she was afforded an opportunity out of town to help with the youth but kindly denied because she had to take care of her children. She worked as a Nursing Assistant at Oak Hill Nursing Home for many years. She took on odd and end jobs just to make sure her children were clothed and fed. She was a beautiful, kindhearted, loving person, which was contributed to her faith in God. In her younger years she attended Money Point Baptist Church with her late Grandmother, Daisy Jackson, where she became a Youth Choir Director and worked with the Youth Usher Board. She went on to attend other churches such as the family church, Willow Grove Baptist Church located in Chesapeake, Va., New Hope COGIC under the leadership of her uncle Bishop Herman Clark Sr. located in Norfolk, Va., and her present church Bethel Baptist Church under the leadership of Pastor Joseph G. Casper Jr. located in Norfolk Virginia. She would give her last in order for others to have, she never turned her back on anyone. If you look in Proverbs 31 you might find her character. She would be the example of a virtuous woman. She was a faithful woman, who was loved by many. She loved her family and never met a stranger. She will be truly missed here on earth but will always be remembered in our hearts. She will be leaving behind 31 beloved grandchildren, a number of great grandchildren, nieces, nephews, and a host of other relatives and friends.

Barbara Elaine Godfrey, age 84, was born October 9, 1936 to the late great Moses and Bessie Clark of Chesapeake, Virginia. After a period of sickness, the Lord gave her wings on June 3, 2021. She was the oldest out of thirteen siblings. She... View Obituary & Service Information

The family of Barbara Elaine Godfrey created this Life Tributes page to make it easy to share your memories.

Send flowers to the Godfrey family.