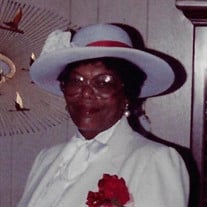 When Aurelia Vivian(Webb)Edmonds answered God’s call from earth to Glory on December 3, 2020, her work on earth was done. She sang to His Glory and worked diligently in the Widows ministry and Missionary Ministry. She served her church faithfully for well beyond 50 years. ”Aurelia was born in Louisburg, North Carolina, to Martha and Richard Webb. She joined Walnut Grove Baptist Church in Louisburg, North Carolina, at a young age. She graduated from Franklin County Training School and attended DeShazors Beauty School in Durham, NC. She moved to Portsmouth, Virginia, as an adult and became a devoted member of Mount Hermon Baptist Temple, where she attended and served for more than 50 years. She chaired the Missionary Ministry and was a member of that ministry and the Laywomen’s Society Ministry until her demise. She loved her church family and attended church regularly. She sang in the Gospel and Combined Choirs as long as her health permitted, adding harmony with her Tenor voice range. She also attended Sunday School and Bible Study regularly. She married William Herman Edmonds. From that union, they were blessed with two children, Maurice Glenn Edmonds and Vivian Denise Edmonds. She is predeceased by her parents Richard and Martha Webb, her brother Nathaniel Richard Webb, her sister Virginia Webb Harris, and her husband and her son. She is survived by her daughter, Vivian Denise (Edmonds) Franks, son-in law, Maurice Joel Franks, one nephew, Sylvester Harris, Jr., one aunt. Pearline Pearce, NC; three grandchildren, Maurice Jonvil Medley, Monice Anjoel Franks, and Dion Franks; five greatgrandchildren, Grace Dianne Franks Whitaker, Maurice Grayson Medley Whitaker, Samaria Blackmon, Lauren and Madisyn Franks, and a host of cousins, friends, and her Church Family

When Aurelia Vivian(Webb)Edmonds answered God&#8217;s call from earth to Glory on December 3, 2020, her work on earth was done. She sang to His Glory and worked diligently in the Widows ministry and Missionary Ministry. She served her church... View Obituary & Service Information

The family of Aurelia Edmonds created this Life Tributes page to make it easy to share your memories.

Send flowers to the Edmonds family.