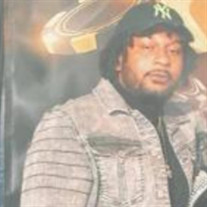 Antonio “YoYo” Stiles gained his wings on Sunday, February 21, 2021, at the tender age of 37. He was born December 22, 1983 to Eulalia Stiles and blessed with two very supportive fathers, Calvin Darden and Anthony Stiles. He attended I. C. Norcom High School and later became an insulator worker at various shipyards. Not only was he a hard worker but a great supporter to his family. Most importantly, he was a comedian that showed others to find humor in the most mundane situations. Even though he was suddenly taken away from this world, his loving heart, his beaming smile, and his contagious laugh, left a beacon of light for all of his family. “YoYo” is survived by a host of loving family and friends. His children adored him and to them he was their “best friend”, as he was a proud, caring, and loving father to four beautiful children: Akiera Sessoms, Montana Stiles, Ameerah Stiles, and Jade Stiles. His siblings trusted and relied on him, as he was a very protective brother to Tiko Holman (Lacey), Robert “Tynk” Stiles, Calvin “Duke” Gray, Calvinviontay “Will” Stiles, Cherika “Rekay” Stiles, Shaniqua Horton and Antwanette Jackson. His lifelong partner cherished him, as he invested many years of building unforgettable memories with Rosalyn Moore. He is also survived by a host of nieces, nephews, aunts, uncles, cousins, and friends. He was preceded in death by his grandmothers: Margaret Jones and Mary Lee Jordan. Most notably, “YoYo” was his children’s biggest cheerleader. He motivated them, had several one-on-one “daddy” talks, worked out with them tirelessly, and uplifted them to ensure that they learned to overcome obstacles in life and to never give up. He loved spending time with his family and shared treasured moments that will live on with each and every one of us for a lifetime.

Antonio &#8220;YoYo&#8221; Stiles gained his wings on Sunday, February 21, 2021, at the tender age of 37. He was born December 22, 1983 to Eulalia Stiles and blessed with two very supportive fathers, Calvin Darden and Anthony Stiles. He attended... View Obituary & Service Information

The family of Antonio Maurice Stiles created this Life Tributes page to make it easy to share your memories.

Send flowers to the Stiles family.