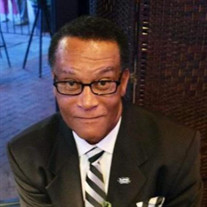 On Thursday, July 15, 2021 our all-wise and sovereign God, called home our loving husband, father, grandfather, brother, uncle, cousin and friend, Anthony Gerald Wilkins, Sr. Anthony, is affectionately known as “Bird”, “Antnee-Bird” and “Deacon Wilkins” to friends and loved ones. He was born on July 7, 1954 to the late Mary E. Brite Wilkins and the late John W. Wilkins, Sr. in Portsmouth, Virginia. He attended school in the Portsmouth Public School system and graduated from I. C. Norcom High School, class of 1973. He continued his education at Norfolk State University as a Fine Arts major. Anthony was a man who truly believed in taking care of his family. In his earlier years, he was employed by the Navy Exchange and Howard Security Company. After 29 years of faithful and dedicated service, he retired from the Norfolk Naval Base as a Police Officer. He was also an entrepreneur. In 1989, he began working Primerica Financial Services with his wife, Dolores and continued up until his passing. No grass grew under his feet. He was always searching and looking for new recruits. His motto was, “Don’t let anyone steal your dream!” And he didn’t. Although Anthony was a busy man, he found time to watch his favorite NFL Football Team, the Dallas Cowboys. You couldn’t wipe the smile off his face when his son, Reggie surprised him with a trip to his first professional game to see his team! He also loved watching gymnastics. On September 12, 1982, Anthony married his soul mate, Dolores Wilkins and to their union was added three children. He was definitely a family man. He loved and cherished his family. He would often tell his wife, “she should have been a general, because she could certainly give orders.” Anthony truly loved and cared for his mother-in-law, Mrs. Retha M. Jordan as if she had birthed him in the world. He was her everything! His children and grandchildren could make his heart skip a beat. There was nothing he wouldn’t do for them. He brought them up to love the Lord and to always strive to be righteous in His sight! He was the priest of his home and a true man of God. He accepted the Lord in his life as a young man and had no problems sharing God’s goodness with all who came across his path. Anthony was a member of First Baptist Church Taylorsville where he served on the usher board. Years later, he became a member of St. Mark Deliverance Center under the leadership of the beloved Chief Apostle Marion M. Jones, serving on the Deacon and Usher Board. He remained faithful to St. Mark as well as the current pastor, Overseer Martha Provo by continuing to do whatever he could when needed. He was predeceased by his two brothers, Leary Wilkins, John Wilkins, Jr. and brother-in-law, Reginald Jordan. He leaves to cherish his memory, his wife of 39 years, Dolores Wilkins; three children, Anthony G. Wilkins Jr. (Tiffany), Reginald J. Wilkins, and Crystal S. Wilkins; one brother, Carl D. Wilkins, Sr. (Brenda); two sisters, Janice Wilkins-DeBerry and Fadakah R. Muhammad (Warner); two grandchildren, Arianna Wilkins and Anthony G. Wilkins III; his mother-in-law, Mrs. Retha M. Jordan; a host of nieces, nephews, other relatives and friends.

The family of Anthony Gerald Wilkins, Sr. created this Life Tributes page to make it easy to share your memories.