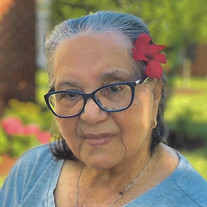 Ana Elina Gonzalez affectionately called 'Yaya" was born to the late Felipe and Ana Marie Gonzalez, in Mapire, Venezuela on July 25, 1939. Yaya was blessed with a large and loving family. She married her best friend, Ramon Antonio, on May 28, 1958 in Ciudad Bolivar, Venezuela. She was a devoted wife of 64 years, raising her two children with patience, discipline and humility. She taught them to read, write, how to love and to be compassionate towards others. Yaya was a fun-loving woman with a lot of personality and very little hesitation to speak her mind. Yaya was loved by all who met her. Yaya went home to be with her Lord and Savior on October 1, 2021, after a long 8 year battle with all kinds of challenges, that she overcame one at a time, becoming a strong warrior and trooper. Yaya was preceded in death by seven of her siblings: Alejandro, Felipe, Raul Gonzalez, Isabel de Bastidas, Clara de Fuentes, Maria Coralina and Tomasa Gonzalez. Yaya's legacy will be carried on by her husband (and bestfriend), their son and daughter-in-law Carlos and Julie Gonzalez, her daughter and son-in-law, Aneyra (Annie) and Omar Bouquet, her sister Alicia Gonzalez, her sister-in-law Felicita Gonzalez and her husband Oswaldo Vera, and her grandchildren Carlos (Pepe) Ian Carlos, Jose Ramon, and her only grand-daughter Carla Carolina. Yaya was a great grandmother to Kylie, Adrianna, Dominic, Amelia, Kalani and Elena. Yaya was the best aunt to Silvia Rios Gonzalez, Ana Pompermier, Rosita Gonzalez, Consuelo Gonsalves, Lila Fuentes, Ana Maria Gonzalez and many more nieces and nephews, with a long list of friends all around the world such as Alberto & Rosa Pernalette, Andres Melo, Mauricio & Rosa Argelia, Donald & Jill Speights and Yanira Mendoza, Kathy & Rafael Collado, and the Baez Girls. Rest In Peace Yaya!

Ana Elina Gonzalez affectionately called 'Yaya" was born to the late Felipe and Ana Marie Gonzalez, in Mapire, Venezuela on July 25, 1939. Yaya was blessed with a large and loving family. She married her best friend, Ramon Antonio, on May... View Obituary & Service Information

The family of Ana E. Gonzalez created this Life Tributes page to make it easy to share your memories.

Ana Elina Gonzalez affectionately called &#39;Yaya&quot; was born to the...

Send flowers to the Gonzalez family.