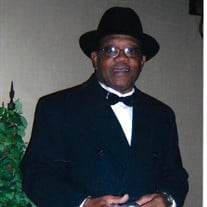 On Saturday, July 3, 2021, the Angel of mercy silently and peacefully came into our midst and gave our beloved husband, father, grandfather, brother, uncle and friend eternal rest. Alfred Alston, Jr. was born July 25, 1931 in Punta Gorda, FL to the late Edna Louis Alston and Alfred Alston, Sr. He was educated in the Norfolk Public school system and attended Norfolk State University. He retired after 20 years of service in the United States Army and worked several civil service jobs. Before coming to Grove he was a faithful member of Saint Paul CME of Norfolk for over 50 years where he served as a deacon and head of the food ministry. He was blessed to be with his true love and best friend Harriett Alston for sixty-five years. To this union one daughter, Miranda Harding and three sons, Dwayne, Ronald and Terry Alston were born. He had the love of gardening, he loved to cook and entertain and made sure that the people in the neighborhood had food. Alfred was predeceased by two brothers Jimmie L. Alston and James P. “Pete” Alston, and two sons Dewayne A. Alston and Terry A. Alston and one grandson, Michael Alston. He leaves to cherish his memory his daughter Miranda Harding (Frederick) of Suffolk, VA, Ronald Alston of Portsmouth, VA, Robert Green of Maryland and Roger Ellis of Seattle, WA, six granddaughters, Taleshia Keys, Jasmine Harding, Tenika Smalls, Lashonna Ellis, Nicole Ellis, and Terrane Green, four grandsons, Frederick Harding, Jr., Terry Jones, Dominic Martin, and Nicholas Ellis, twenty-five great grandchildern, five great great grandchilder, a host of nieces and nephews and a special aunt, Margaret Wooden.

The family of Alfred Alston, Jr. created this Life Tributes page to make it easy to share your memories.