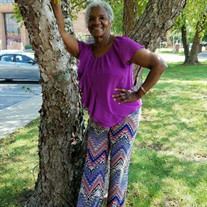 Agnes Anita Wallace, daughter of Mary Anderson and Obed Agabus Hibbert, was born on September 5, 1938, at Kings County Hospital in Brooklyn, New York. She was affectionately known as Aggie, the youngest sister to Lally and Eli Hibbert and Eleanor Jones. She passed away on September 15, 2020, with family at her side. Anita was raised in Brooklyn, New York and, graduated from Girls’ High School. She received her associate degree from Pace University. After leaving Brooklyn, she moved to Long Island City, Queens, New York. It is in Long Island City that she raised her three sons Asante, Eric, and Jule. In 1987 Anita relocated to Toano, Virginia. She would meet and marry her husband, David Randall Wallace, on January 2, 1993. After 24 years of working at Hampton University, Anita retired as a Library clerk. As the years to come would reflect, Anita had a genuine zest for life, and her real joy came from sharing God’s word by auxiliary pioneering as often as she could. She was baptized as one of Jehovah’s Witnesses on December 30, 1960, who believed wholeheartedly in the blessings Jehovah God promises at Revelation 21:3 and 4. During her ill-health and to the end, she maintained her integrity to Jehovah God. Anita had the privilege and honor of aiding others into the truth and becoming a spiritual mother to many. Most will remember Anita as fun, loving, and warm. She loved her pictures, and when you walked into her home, you would know immediately the apple of her eye were her two grandchildren, Erica Beige and Terence. Anita enjoyed music, dancing, and making people laugh. She was known as a conscientious healthy eater. When she was not home, she was traveling to see her large sisterhood of friends. Anita leaves to mourn her sons, Eric and Julie Smith, her daughter-in- law, Theresa, and her two grandchildren, Erica Beige and Terence Smith, as well as a host of nieces, nephews, and spiritual brothers and sisters. Services via Zoom Saturday, October 3rd, 2020 - 4:45 p.m. Meeting ID: 868 7368 4120 Password: 986012

Agnes Anita Wallace, daughter of Mary Anderson and Obed Agabus Hibbert, was born on September 5, 1938, at Kings County Hospital in Brooklyn, New York. She was affectionately known as Aggie, the youngest sister to Lally and Eli Hibbert and Eleanor... View Obituary & Service Information

The family of Agnes Wallace created this Life Tributes page to make it easy to share your memories.

Send flowers to the Wallace family.